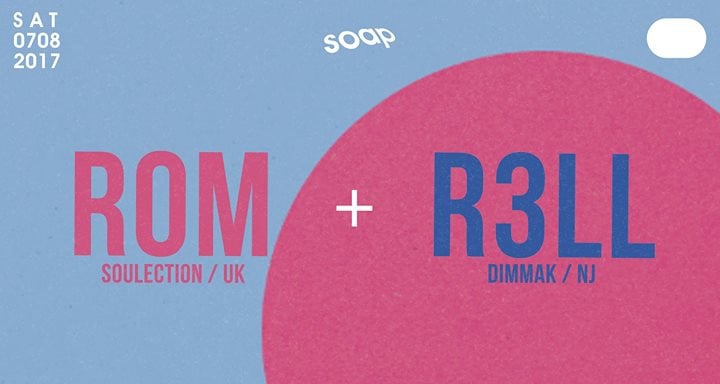 Rommel Donald, better known as the ROMderful. is a producer, Multi Instrumentalist and DJ based in Birmingham (UK).

He has a very unique style which is known as ROMderful. Fusing genres, layering guitar and always maintaining vibes. ROMderful has support from some of the most notable collectives and artists in this such as Soulection, Sony, Ryan Hemsworth, Goldlink, HW&W and many more.

ROMderful was named the first 'Artist to Watch' of 2017 on EARMILK. Come check him out at SOAP

As the rest of the world has finally begun to latch on to Jersey Club and barrel forward at the speed of light, original Brick Bandits crew member R3LL has long been running things in his native Newark, helping to build awareness of his homegrown sound that The Fader lauded “the most deliriously entertaining dancefloor movement of the moment” and Thump, in a recent review of R3LL’s debut EP Directions, called “one of the most exciting happenings in all of dance music.”

R3LL’s highly anticipated, debut EP “Directions”, the inaugural release on the Brick Bandits label, showcased solid Jersey Club tracks such as Ponanay (chosen by Vice to soundtrack their documentary series on Jersey Club), alongside ground-breaking collaborations with Sinden and Riddim Commission, where Jersey Club came face-to-face with Bass and House for the very first time.

The media proclaimed nothing but love for Directions, with R3ll universally lauded as the crossover face of Jersey Club and high-profile tastemakers such as Diplo, Annie Mac, Cashmere Cat, Nina Las Vegas, Nick Catchdubs and Anna Lunoe showed enthusiastic support for the New Jersey wunderkind.