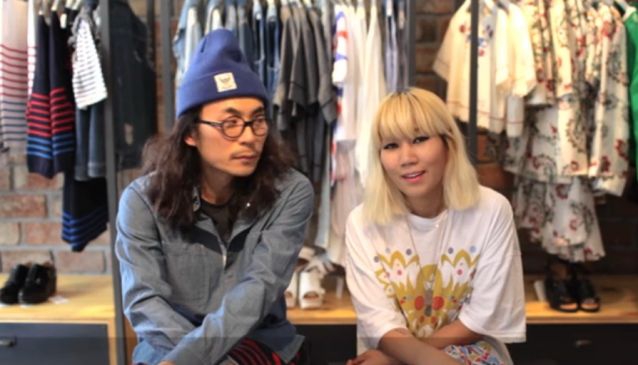 Seoul based designers Steve J & Yoni P are like the Asian version of Johnny Depp and Anita Pallenberg. The duo are the most eccentric fashion designers in Seoul. The creative brains behind their own quirky, trendy and contemporary label; 'Steve J & Yoni P'.

Both having studied at the prestigious Central Saint Martins & London College of Fashion, they debuted their first collection at London Fashion Week in 2007, which was an instantaneous success.

By injecting whimsy and funk into their designs, they have arguably become the most celebrated design team in Seoul with a flagship store in the trendy Itaewon district titled, 'Two Heads are Better Than One' - inevitably on their way to global recognition.

Every season Steve J and Yoni come up with graphic design concepts for their collections, so there is a lot of emphasis on graphic design. They also pay close attention to their use of color and knit fabrics. Their style is very artistic and innovative. All the clothes is manufactured in South Korea and with a team of only 7 people, they plan to keep it small, like a family.

They brainstorm together and put a lot of emphasis on bringing laughter to their customers, so all of their collections always have an aspect of humor and wit. However their main source of inspiration are their three cats: Kush, Lash and Jjush.