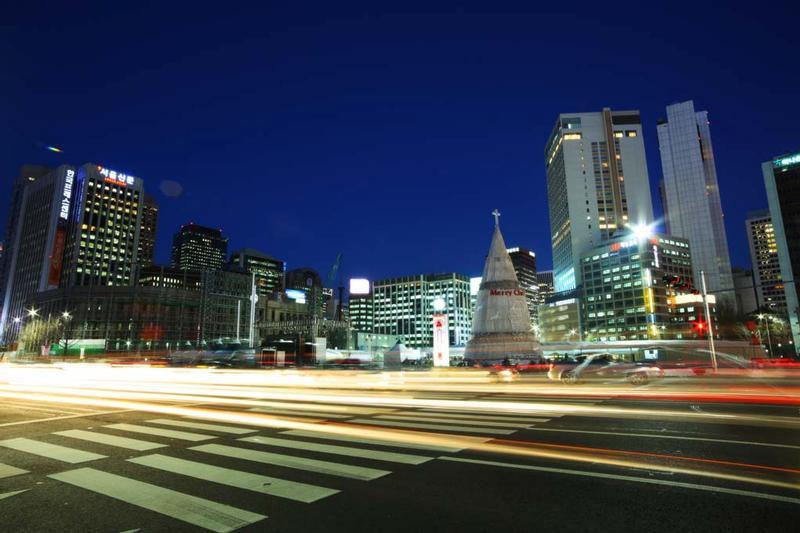 City Hall is a historic area filled with history, culture and natural beauty of the Joseon Dynasty all surrounded by modernity creating a unique atmosphere. City Hall is the city's cultural showpiece in the heart of Seoul.

Located in the main downtown, across from the Plaza Hotel, it is considered the city center. In this area you can find the majority of landmarks that symbolize Korea's past and present. After hundreds of years of Joseon Dynasty in Seoul, it is only natural that this part of Seoul exhibit the essence and aesthetics of classic Korean architecture and culture.

On either side of Sejong Street that cuts through the area rests City Hall, The U.S Embassy, Sejong Arts Center, Seoul Finance Center and at the end - a landmark and symbol of Seoul's history as capital city during the Joseon Dynasty, Gwanghwamun Gate. In the middle of Sejong Street lies the beautiful Gwanghwamun Square, a plaza area honoring King Sejong and Admiral Yi Sun-Shin, the naval war hero of Korea.

The view from Sejong Street puts the panorama of nature, history and culture into perspective with Gyeongbokgung Palace's main gate taking center stage, the peak of Ingwang Mountain in the background and the bustle of Seoul in the foreground. The landscape of downtown Seoul is breathtakingly beautiful. Take a look at our visual diary to find some stunning images of the cityscape.

Go sightseeing at Seoul's tourist attractions using Seoul City Tour Bus which stops in front of every major attraction in the City Hall Area or watch the royal guard changing ceremony at Deoksugung Palace and eat at one of the many famous restaurants in the narrow alleys surrounding the City Hall area.

Visit Gwanghwamun Square just before sunrise or sundown and you will be able to capture some amazing photography, looking in one direction you will see the mountains in the background and in the opposite, you will get a beautiful glimpse of the downtown skyline. It all happens in the magical blue light hour, the first and last hour of sunlight during the day. Check our weather page to see what time the sun rises and sets in Seoul.