6 Korean Foods For The Adventurous

In the world of international cuisine, Korean food is an underappreciated heavyweight. It boasts some of the most savory dishes in Asia, ranging from barbecued beef, fried pork cutlets, a wide variety of steaming soups, and hundreds of spicy kimchi dishes. No matter what the Seoul weather or what season it is, Koreans have a delicious entrée picked out especially for the occasion.

Seoul is a heaven for the foodie traveler.

Aside from the more traditional Korean BBQ, samgyeopsal and bibimbap dishes, there is a whole other world of Korean food that might make one do a double take at first.

While most meat eaters have no reservations about eating the legs of a chicken, how about going all the way down to the feet? You may enjoy a nice cut of ham, but how about going one step further and snack on the internal intestines? Eating something that isn’t quite dead yet?

Read on for 6 of Seoul’s craziest foods... 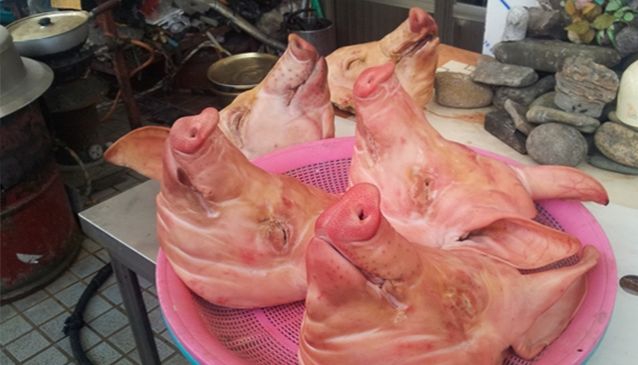 One of the most popular street foods in Seoul, sundae (ìë) is a type of blood sausage. Although there are many varieties of sundae to choose from, the most typical kind of sundae is made of pig’s intestines stuffed with noodles and pig’s blood.

Sundae can be found almost everywhere on the street in Seoul. You won’t need to go to a restaurant for it, just check out any of the orange tents in high foot traffic areas like Gangnam Station or Konkuk University. It usually costs about 3,000 won (~$3.50), and you are always given a heaping portion of it, almost too much for one person to handle. Oftentimes sundae is covered with ddeokbokki sauce and flavored with salt, combining the savory flavor of pork with the spice of red chili peppers.

Street vendors often pair sundae with fat rice cakes and deep-fried seafood in what is called Twiddeoksun (íë¡ì), an amalgamation of the words twigim (deep-fried food), ddeokbokki (rice cakes), and sundae for about 5,000 won. This is a street food feast that you’ll have to share with friends because unless you’re trying to fatten up in preparation for the Korean winter, there’s no chance you’ll finish it all.

Once you get over the fact that sundae is made of pig’s intestines (guess what? That’s how you make nearly ALL sausages) and that it’s soaked with blood, you’ll find that sundae is extremely satisfying, savory, and addictive.

The blood content in no way imparts any flavor to the sundae and mostly just gives it color. After nearly three years of avoiding sundae because of the thought of eating blood, I’ve become a major sundae convert and have been kicking myself for time wasted by not eating sundae. Why? Because it’s delicious! 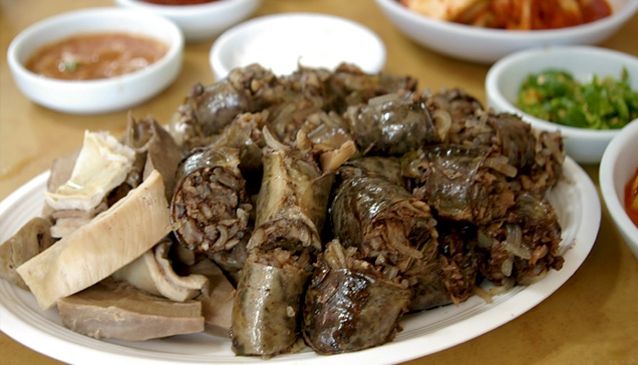 Koreans love meat, and they ensure that no part of the animal goes to waste. After cutting portions off every part of a pig, there comes a point where almost nothing is left to eat except for the feet. Except, those definitely get eaten!

Enter dalkbal (ë­ë°). Bal is the Korean word for feet, and dalkbal is exactly that: chicken feet. And before you go thinking that this is some kind of obscure, dying food that only older Koreans indulge in, know that both dalkbal and jokbal are widely popular and restaurants serving these foods can be found everywhere in Seoul.

Dalkbal doesn’t pretend to be anything that it’s not. It looks exactly like a chicken’s foot. Usually, it’s covered in spicy yangnyeom garlic sauce, which makes everything taste great.

There are two kinds of dalkbal. One kind you’ll need to use a glove with. Put on the plastic glove, pick up the dalkbal, and start nibbling away at all the delicious meaty bits around the feet.

The other kind of dalkbal is small enough that you only need to get a pair of chopsticks and eat the entire piece.

You can find dalkbal in almost every Korean style pub, or hof, in Korea.

We recommend trying Bangbeom Pocha located in Gyeongnidan, Itaewon. Everyone is talking about this small Korean dining pub, also featured in many magazines. Locals come here to eat tasty side dishes, drink and have a good time and it's not unusual to see guests sing or entertain other guests. A very local experience indeed! 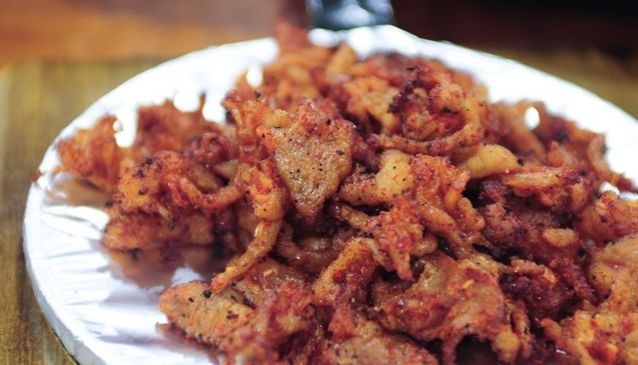 Maybe you’ve tried octopus before on some sushi back at home. Maybe you’ve even eaten octopus in some Korean-style dishes that you weren’t exactly expecting (baby octopuses in my cream pasta?) but just went with it. But how about eating chopped up octopus that was connected to a living octopus just five minutes before?

Sannakji (ì°ëì§) is chopped up octopus legs, and they move around. Although they don’t realize that they’re already chopped up and ready to be eaten, they will put up a fight - sticking to the plate with their suction cups and to your chopsticks.

Sannakji is usually served with sesame and sesame oil, although many restaurants will have the Japanese soy sauce/wasabi combo or other Korean sauces on hand as well. Chew them up well before swallowing - urban legend has it that some people have choked on particularly large pieces of sannakji!

Although this might put off the cautious traveler, if you’re visiting Seoul, having sannakji is an absolute must do. It may take some courage to look at a moving plate of octopus legs and convince yourself to eat them, but just do it.

It’s a Seoul badge of honor to have eaten sannakji - a dining experience that you’ll never forget. It’s not a main dish, so while you wait on some delicious sliced up hoe, pour yourself a shot of soju and get ready for some live octopus!

There’s no better place to get it than Noryangjin Fish Market, Seoul’s largest seafood market!

You can get to Noryangjin by subway, line number 9 and head towards the seafood market. Even if sannakji proves to be too daring for you, Noryangjin’s wide variety of restaurants will definitely have something to please the hungry seafood lover. 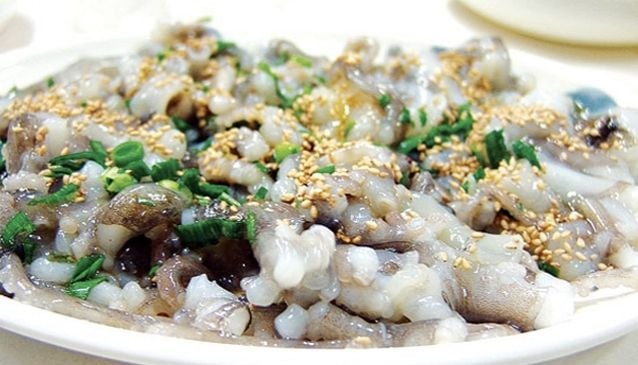 You’ll smell it before you see it. Beondegi (ë²ë°ê¸°) is steamed silkworm larva. These little critters are the same things that produce all the silk that makes your soft and beautiful silk clothing. But did you know that they also double as one of Seoul’s most popular street snack?

People who have travelled to Taiwan are no doubt familiar with Taiwan’s famous “stinky tofu”. This type of tofu has such a distinctive, rotting garbage smell, that many travelers can’t get over to try it. Beondegi is Seoul’s stinky tofu. It has a certain characteristic smell that some people love, but others can’t abide.

Beondegi has a woody, earthy taste to it that some people believe makes it great for a perfect in between meal snack, whereas other feel like they just taste like dirt. However, if you are daring enough to try it (and even begin enjoying it), you will be that much closer to acculturating into the truly authentic, traditional Korean cuisine culture.

Beondegi is a very common street snack that you can find in all pedestrian areas. It’s also sometimes served in Korean style pubs as a drinking snack. If you’re in the vicinity of Hangang Yeouido Park, there is always a man selling beondegi right at the park entrance. 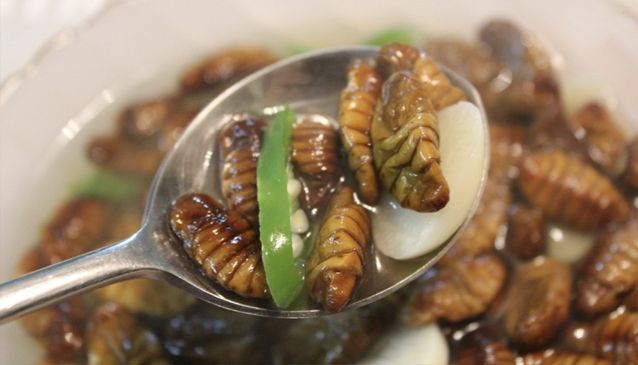 The name is deceptive. Dalkdongjip (ë­ë¥ì§) translates directly into “Chicken Poop House,” which might lead one to believe that dalkdongjip comes from the…nether regions of the chicken.

Fortunately for the adventurous diner, this is far from the truth. It actually is cooked chicken’s gizzard. The gizzard is a piece of the chicken’s stomach that helps it digest rough pieces of food, since, having beaks, chickens don’t have the ability to chew their food before swallowing. So it really comes from the inside of a chicken’s stomach, which is a decidedly less unsavory region of the chicken’s body.

Dalkdongjip is actually quite good. It’s a bit crunchy, so you’ll need to chew it up yourself a little bit before swallowing. It usually comes as a stir-fry mixed with onions and peppers, so in a lot of ways it tastes kind of like a pepper steak, only with less steak and more chicken gizzard.

It goes very well with soju, which is why you will find dalkdongjip at Korean hofs and pojangmacha, which are the outdoor tents all over Seoul that serve cheap food and drink in a lively and social atmosphere.

A pojangmacha (í¬ì¥ë§ì°¨) is probably the best place to find and enjoy dalkdongjip. We are big fans of the pojangmacha “tent city” currently in front of I'Park Mall at Yongsan Station. They are very easy to find; just take the subway to Sinyongsan (line 4) and look for the group of 10 or so orange tents clumped together in front of the mall. Any one of them will do. 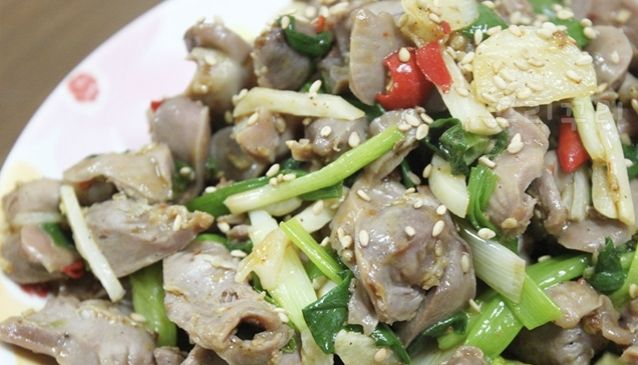 No list about exotic Korean food would be complete without mentioning boshintang (ë³´ì í), which is perhaps one of Seoul’s most controversial foods.

Although one expects to encounter a lot of very strange and unique types of foods around Asia, few foods invoke as controversy and emotional response as boshintang - which is dog soup.

Yes, dog is on the menu in Seoul. There are dog farms where dogs are raised for meat, in exactly the same way that cows, pigs, and chickens are. For some, memories of a former loved dog in the house makes this food too challenging for some to stomach.

Others view boshintang as any other meat. Meat, in its simplest definition, is animal muscle - so a dog is no different than a cow. Meat is meat. This is the view taken by a lot of Koreans, especially older Korean men, who believe that dog meat has special properties that restore health and virility.

Boshintang, while not widely popular in Seoul, is still a common dish, and you can find boshintang restaurants in almost every Korean restaurant in various neighborhoods in Seoul.

But what does it taste like? Boshintang comes in a boiling soup mixed with green peppers, gochujang (red pepper paste) and duengjang, which are very common ingredients in many delicious kinds of Korean soups. The meat itself has a chewy, its the roast beef flavor added to it that actually tastes good.

So, if you’re a meat eater, and you didn’t grow up with a treasured puppy licking your heels during your childhood, you might want to look into boshintang! 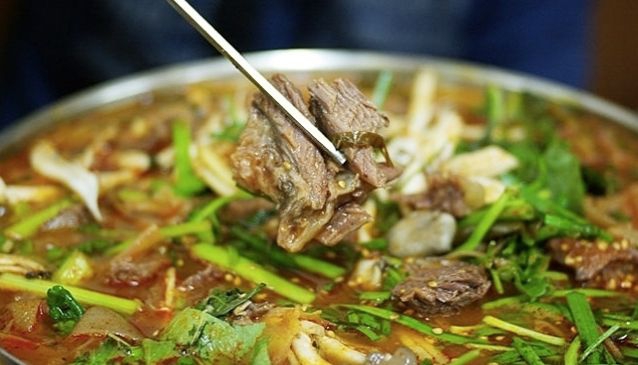